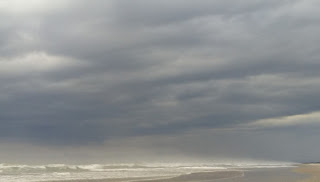 Excerpt from THE TOWER:

“Protection—she wants protection—I’m the one who needs protection. She’s the one killing people, not me.” Don’s hands tightened on the steering wheel as he pulled from the vacant driveway.
A mottled gray and silver sky barely lit the morning; he switched on his dims and pressed his foot hard on the accelerator, steering the Dodge toward North Topsail. “What in the hell am I supposed to do?”
He turned right, before the police station, and headed to the end of the island; it was a long drive of mostly vacant rental houses. He slowed and passed them, consciously endeavoring to slow his heart rate. He breathed in; exhaled—but he couldn’t rid himself of the self-loathing for having spent the entire night with Estelle.
Pulling into the island parking lot or what was left of it from the last storm, he swung his legs out of the car and walked toward New River Inlet. Already a few fishermen were poised with their rod holders and chairs, casting lines out into the waters. “Hell, it’s not even seven o’clock.” He mumbled.
As he walked Don could feel the damp salt air, laced with coolness, against his arms; he glanced toward the ocean and horizon, the misty morning limiting his view and hiding the colors usually so prominent and vibrant; it felt fitting to be surrounded by grays and muted colors. Even the breakers curling and releasing their spray seemed drab.
How long he walked, he wasn’t sure, but the sun was nearly straight overhead, the mist and fog having burned off, by the time he circled back and made his way toward the Charger.
He couldn’t even recall all he’d thought about; but it had left an uneasiness coupled with the gnawing empty feeling in his stomach; he stopped at Sea View fishing pier, ordered a burger and fries and headed to his own house in Surf City.
Slouched on the sofa, he flipped through  channels; old movies, news shows, reruns of 70s sitcoms, talk shows—“would the audience like to know if it’s Henry’s baby?” the emcee thrust the mike toward the crowd. A roaring ‘yeah’ filled the room; a broad smile played on the emcee’s face.
“Garbage,” Don pressed the off tab and threw the remote against the wall.
She was on his mind, Estelle. Images of their raw sex taunted him, leaving him with the same sick feelings he’d been wrestling with for the last few years. Their images, Sarah’s, Reggie’s, Milton’s—even his own son’s, lodged in his head and would not leave. “Fuck it.” He slammed his fist into the wall.
His cell phone buzzed; he checked out the lighted display—Carrie. He let it buzz and watched the message icon light up. He wasn’t about to talk with her now, not after being with Estelle. His fist slammed the table.
He showered, drove to the IGA and bought a twelve pack of Bud and a pack of Pall Mall then sat on his porch and smoked nearly half a pack before crumpling the remainder and tossing it into the trash. He felt his stomach rumble; he ignored it and watched the reddening sky turn to indigo and them starlit black.
THE TOWER should be available by spring.