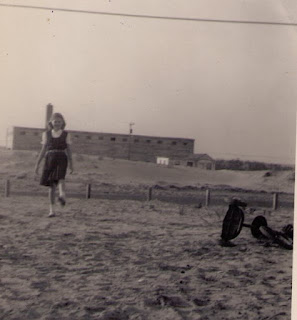 Lots of people have asked about the big chimney standing just north of HWY 55 (restaurant) and across from the flower shop in Surf City. Well, that chimney was part of an enormous World War II warehouse. (in the background of this photo)
It housed military vehicles that the kids of Surf City used to play on. Finally someone had them removed (drat, they were fun) and the building was cleaned up. Basketball hoops were installed and the warehouse became a make-shift community center for we kids.
That’s Diane Batts in the foreground. She lived directly across from the building.

In front of the warehouse is a little laundry run by a woman named Inez Frye. Later, Inez opened an ice-cream parlor where one could order soft serve ice-cream. Now, that was a big deal.

QUOTE: No distance of place or lapse of time can lessen the friendship of those who are thoroughly persuaded of each others worth.-Robert Southey

WRITING TIP;  Leave ego at the door when you write. Be kind, love yourself. The world where you go to write must be a place of honesty and self awareness.