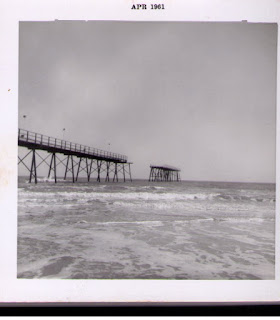 I keep forgetting that this blog is supposed to be about writing tips. Okay, ya want a writing tip-here it is: quit reading other people’s stuff and comparing it to what you think you could be capable of doing. YOU are not THAT person, you are your own-self.-do YOUR thing. It is tough putting yourself out there every day for criticism but that is what being a writer is, quit making excuses for what you think you should be and just be yourself. Because, sweetie pie, it doesn’t matter what size golden eggs you lay, there will always be someone to say they are the wrong shape and wrong size. How’s that for a tip?
Now on to the important stuff, the photo. This was taken after hurricane Donna. I remember coming home from Camp Lejeune (where we stayed that year for the storm) and seeing three houses floating down the Intracoastal. WOW! I thought it was cool. Then before the storm I remember running up to the dunes and walking out as far as I could on this little jetty that the ocean had created and watching the cascade of waves crisscrossing one another, I seems some were even going backward. The wind was blowing ferociously, and I recall fighting against it and loving every second. Yippee! Mother Nature!  Imagine–being exposed to such strength and awesomeness at such a young age. Anyway, I digress–this picture is an example as to what usually happened when a storm came through. Even though it may originate from the south, they always seemed to swirl to the north of the island, knock out McKees, then Paradise-pieces of those piers would move southward to hit the remaining fishing piers (Ocean City, Barnacle Bill’s, Surf City, Dolphin, Jolly Roger-Scotch Bonnet wasn’t built until ’64, I think) I believe this is Surf City Pier. Because of those piers, Topsail was referred to as  THE FISHERMAN’S PARADISE.
I do want to thank those of you who visit my blog. A couple of you have mentioned it to me at the markets. Thanks again and I hope I’m informative.