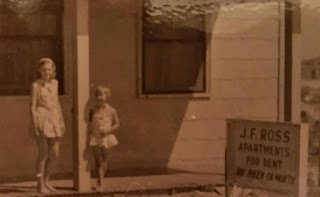 Long, long ago there were two young girls who lived in a magical place called Topsail Island. The island was such that these two girls, and many of the other children who lived there, had the freedom to spend all day playing in the sun, sand and beautiful ocean that surrounded it.

The parents of the children were all hard working people. They were also a generous people and in months when times were hard, they opened up their hearts to the community and gathered together to feed chicken and fish and oysters to everyone.

This magical place still exists, though mostly in the hearts and minds of those that remember the magic of Topsail and those days long ago. Glimpses of it can be seen in the remnants of tall towers, of wooden pilings standing staunchly in the Atlantic, and in the friendliness of the islands long time residents.