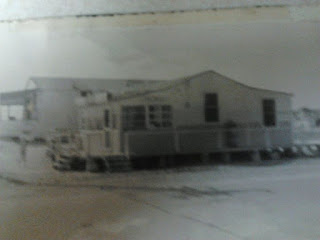 This is a photo of the old Sea Gull restaurant in the early 1960s. My mom and dad ran it for a couple of years. By the 1970s it was gone. Now that space is a parking lot.
Following is an excerpt from one of the short stories in my new book PLUM DUFF. Frequently the little Sea Gull will show up in my stories, though it may be at a different location-I just loved the place so much I have to include it in my stories. PLUM DUFF should be out in a couple of weeks.

The menu was one sheet of laminated paper printed on both sides. Helen grasped it with her fingers, thanking the waitress, then wiped a smudge away with a napkin.
Focusing her eyes through the no-line bifocal lenses of her glasses, she read the list of foods.     The list was short-mainly burgers, fries, sandwiches and seafood.
The Sea Gull restaurant, situated next to the island fishing pier, despite its fantastic view, was not on the list of must go places on Topsail Island. Locals were the main clientele.
It wasn’t like Helen to come to such a greasy spoon, but she’d heard that the grouper was the best. Unlike most of the other restaurants on the beach, the Sea Gull’s seafood was not overcooked nor over breaded.
She set the menu on the table and looked about the room. It was nearly empty, but then it was late October and most of the tourists were gone for the year. Only a few fishermen hung on, endeavoring to catch fresh seafood of their own.