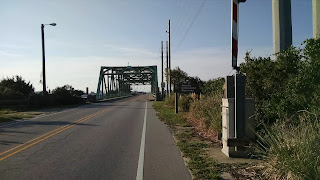 Often people ask me what I think of our little swing bridge being replaced by what Cathy Medlin so eloquently described as-a cement snake.Well, I agree with Cathy and think the whole idea of replacing our historical landmark stinks! We do not need this “snake” – a cookie cutter bridge that all the beach towns along the eastern seaboard are putting in. Oh whoopee! We get to be like everybody else. Our bridge makes us unique.

Proponents of the new bridge argue that the traffic and population growth warrants such a change. But if you stand at the stop light you’ll discover that over fifty percent of the people who come to Topsail Island , turn right and go south. So,if that is the case, why not put in something that will both cut down on the congestion in Surf City and allow people to get to the south end quicker. How about a ferry. Tourists love FERRYS. I love ferrys.

“Oh, but the bridge is old and needs replaced.” I hear this from a few also. Well, I’m old. Most of my readers are old. So is the Brooklyn Bridge and the Golden Gate Bridge, The dome at our capital in Washington DC is old and yet it is being repaired. Don’t we pay taxes to have things fixed?

Well- I guess I can put forth my arguments as long as I want-many of you feel just as strongly, but the powers that be- scoff at any reasoning other than their own. So I write books and stories about the things and people I love. I also write books about dirty birds too.