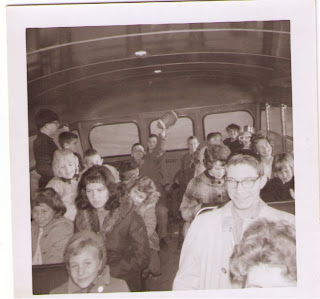 I was behind a school bus today and a thought occurred to me – a distinction between the teens of the fifties, sixties and seventies and the teens of today – During those decades teens were given a most important responsibility – driving a school bus. It carried our most precious assets – our children.

Today this would never even be considered. Kids were more responsible and mature then than they are today. Why is that so? Anyway – this is a photo of the kids on bus 5 that ran the Surf City route. I remember, Donald Batts, Audry Batts, Sheila Atkinson and Linda Batson as the drivers. Does anyone recognize the occupants above?